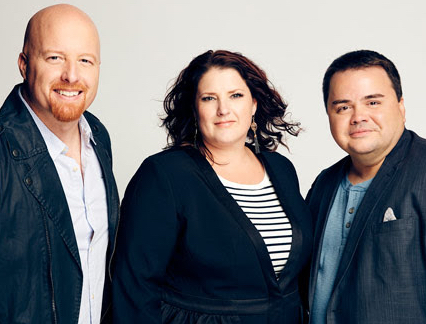 Unmatched talent, a passion for ministry and a deep love for the Church—for 20 years these have been constants for the musical tour de force known as Selah. Amassing more than 4 million units in sales; eight Gospel Music Association Dove Awards; a Gold-certified album and eight #1 singles, the group’s signature hits include “You Raise Me Up” and “Wonderful, Merciful Savior.” Todd Smith, Allan Hall and Amy Perry have together graced the stage of Nashville’s historic Ryman Auditorium and the Grand Ole Opry, all the while carrying a message of hope and healing for those who pause and listen. True to form, Selah’s first all-new recording in nearly three years, Unbreakable, is hallmarked by the beloved trio’s down-to-earth realness, soaring harmonies and unforgettable arrangements.

Produced by Todd, Allan and longtime collaborator Jason Kyle Saetveit, Unbreakable includes contributions from acclaimed producers Charlie Peacock (Switchfoot, The Civil Wars) and Scott Cash (Dan Bremnes). A centerpiece of the album and its lead single, “I Got Saved”— written by Jennie Lee Riddle (“Revelation Song”), Crystal Yates and Corey Voss—lit a very personal fire in Todd, the likes of which he had not felt since first hearing “You Raise Me Up.” He agreed to do anything necessary to get it on the record.

“There’s such a power in the lyric,” Todd says of the Scott Cash-produced and Ed Cash-executive produced song, which brings audiences to their feet, hands raised, singing along. “It reminded me of when I accepted Jesus as a 5-year-old in a small town church in Michigan, of that day and of all He’s brought me through since. When we share our testimony we open up the Gospel and encourage the saints.”

Similarly, the soaring ballad “Broken Ladders” struck a chord with Amy upon her first listen. The song’s message continues to serve as a powerful reminder of her worth in Christ each time she sings it.

All You ever wanted was my heart / My heart, my simple heart
To You that’s all that really matters

“The first time I heard it, I just wept and wept in my car,” she says, describing her life-long struggle with self-esteem and acceptance. “I’ve spent a lot of years feeling not good enough, not pretty enough, and over time I’d gotten to a place of nothing being good enough, trying to meet the impossible fake-perfect standards of Instagram and Pinterest, expectations no woman could ever achieve. ‘Broken Ladders’ broke open something inside me, allowing me to let those impossible standards go, to lay those insecurities at His feet so He can do His work in me.”

“People of the Cross,” a poignant song about the persecuted Church, is particularly important to Todd. He co-wrote the song with Jennie Lee Riddle, and the track was produced by Charlie Peacock. It’s a response to the murder of 21 Egyptian Christians at the hands of ISIS and a reminder to pray for those who suffer for their faith.

Jesus, we will be faithful ‘til you meet us / Give us Your courage as we finish
We want to hear ‘well done’ / We are the people of the cross

“Many times when persecution is so visible,” Todd says, “it’s because Satan is so threatened. What we don’t see is that God is working supernaturally. Thousands of Muslims are having dreams and visions of Jesus, asking people about the Bible and coming to faith in the midst of all this darkness.”

The joyful title-cut, with its infectious melody and driving beat is an admitted departure for the group, but a contrast they welcome. “We’ve never done a track like that,” says Allan. “It has an 80s retro feel, and it’s just a light pop moment.”

Amidst such powerful new selections are a treasure trove of beloved hymns and standards. From the African-influenced “This Little Light of Mine” (a tribute to Todd’s missionary heritage); to the classic “Got Any Rivers” fused with Christian music pioneer Leslie Philips’ “Carry You”; to the rip-roaring gospel medley of “Swing Low, Sweet Chariot/I’ll Fly Away,” Selah hits their stride, delivering the songs—and that signature sound—fans have long adored.

“Hymns have always been foundational to what we do and who we are,” Allan says.  “We sang ‘It Is Well With My Soul’ at a youth conference one time and were congratulated by a teenager afterward for writing such a ‘cool song.’  I explained to him where the song came from, showed him a hymnal and told him it was chock-full of other really ‘cool songs.’ Parents are always telling us, ‘the only way our kids know these hymns is because we sing along in the car with you.’ If we’ve played a small part in keeping hymns alive for future generations, I feel like we’ve accomplished a dream.”

Indeed, the fruition of Selah’s dream continues, singing the hymnbook as only they can, sharing unbreakable Truth and Hope of the Gospel to those who have ears to hear.